The first part of my vacation in Asia can be found here. This part (still not in Asia) is all about Guam.

Oh Guam, with a population of almost 160K1, no wonder you didn’t want us to leave!

We arrived in Guam and heard Eve’s name over the loud speaker. Running from our gate to the Manila flight we found that there was only ONE spot left, what did we want to do? Since we didn’t want to separate, we decided to spend the day in Guam and try our luck the next evening. We rented a car and hotel package at the airport, and asked the nice woman at the counter for directions.

Me: How do we get to the hotel?
Her: When you see the Home Depot, make a left.
Me: And how will we know it’s the right road?
Her: There’s only one Home Depot, you can’t miss it.

Yes, not only does Guam have 1/12 the population of Queens, New York, it also has only one Home Depot, one Kmart and one mall with one movie theater2 and they use these landmarks to give you directions.

Flights to Manila ran late night to early morning, so the next morning Eve and I decided to take an auto-tour in our rental around Guam to see the island before trying the airport. We got a map and hit the road in our rental. There aren’t many roads in Guam, but we took a road that lead us around the southern half. It took about three hours, including stopping at some lookout points and beach areas. We manage to find a yummy Jamaican Grill called Yo Mon nearby and spent some time surfing the internet at an Internet Cafe in the Micronesia Mall.

We got to the airport and waited for the flights, again, we didn’t make it on so we came up with a plan, try one more night as stand-by, but buy confirmed tickets for the following night. We rented a car and another room, Guam had us in its clutches for one more day. 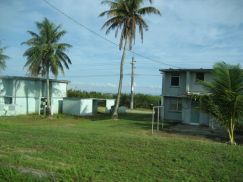 I don’t usually complain about sleeping, but the bed we had was itchy and the place was a little sketchy. I was starting to regret not going back to the place we were the night before. We checked out of there as soon as possible and the second day was spent circling the northern side of the island. Having a car in Guam is very convenient. We got to see the different sides of Guam – the tourist side and the not so nice side. The tourist side is near the ocean and all the big hotels are there. The other side of Guam is where the locals live, where old and new stand side by side and acres of land lie in between. The rest were restricted land, so nothing to see there.

Our ride took us to Two Lovers Point, a place with a scenic outlook and a tragic story. After spending some time there, we deiced to go to the Micronesia Mall again. We were sure we’d make it out that night, so someone (who shall remain nameless) decided to take a bath in sample perfume. It wasn’t really the fact that this someone decided to do that, that made it funny, it was the fact that she did it in the most suspicious way.

“Did I just hear you spray perfume?”
“Yes, it was a walk-by spraying.” 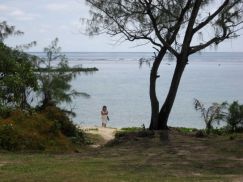 The thing I noticed about Guam is that everyone is friendly and extremely helpful. After spending two nights in budget hotels, the lady at the gate remembered us and started chatting with us. She gave us a tip on how to get a cheap rate at the Hilton hotel, so that night we didn’t need to rent a car, we just took the shuttle to the hotel and booked a room. Our final night was spent in a room with a view of the ocean.

That morning, I wanted to go to the Internet Cafe in the mall3. We didn’t have a car so I had to take the tourist trolley. I went to the stop and saw a man standing nearby. He said hello, so I nodded in greeting. When I got on the trolley, he told the driver to take me for free4. Well, a free one way ride at least, is better than no free ride. He was gone by the time I returned.

After spending three days in Guam, driving around its circumference and seeing the sights, we had enough of Guam, we wanted to start our vacation, we were ready and that night we hoped on a plane to Manila. The adventure begins! 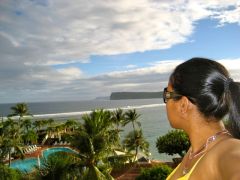 One thought on “Adventures in Asia – But First, Guam”