A few years ago I flew stand-by to Asia. I’ve decided to chronicle it in installments. This is the first part of that adventure.

We got it into our heads, Eve1 and I, to go to Asia for 14 days.  Eve wanted to go to China, but I didn’t want to get a visa, nor did have any desire to go to China, so after some research, we settled on the Philippines, Malaysia and Singapore.

There is this thing that I do, if I have a long, morning flight and want to make sure that I sleep a good chunk of that flight, I usually stay awake the night before so that I’m tired enough to sleep for a long time on the plane. This plan usually works, but, I don’t usually fly stand-by, so I can say in hindsight – I was not prepared!

The plan to get to Asia was to fly from Newark to Houston, then to Honolulu, then connect to Guam and make a final connection to Manila, where our adventure would begin. We got to Newark airport for a 5:30am flight and found that we didn’t make the cut to get on the plane – the flight was full, all standby spots were taken. The next flight was at 1pm in the afternoon, a direct flight to Honolulu. 1pm and I did not sleep for 24 hours.

We “napped” for an hour in the car and decided to go to the mall for a bit of window shopping, or in Eve’s case, shopping for things that might be useful on our trip. Around 12:30pm we found ourselves at the gate, slightly delirious and very hopeful.

1:30pm, the last of the confirmed passengers boarded and by 1:35pm we were on the plane, ready to start our adventure. 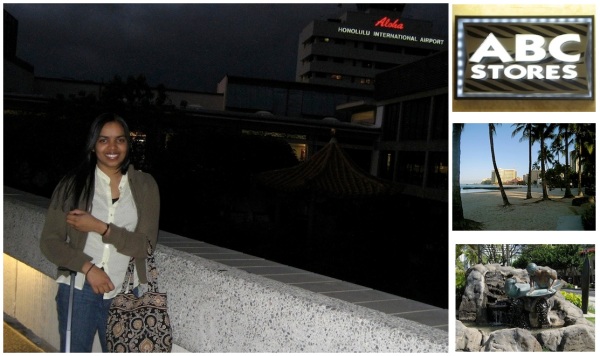 Ten and a half hours later – Hawaii!

Sometimes time changes are awesome. We left the North East at 1pm and arrived at 7pm to Honolulu. The first thing you notice about Hawaii is the lovely weather, then, the ABC stores.

We found a cheap hotel in Waikiki, just opposite the beach. Even though we were flying on a flexible schedule, we still had some solid plans in Asia (one does go to a foreign country – where English is not the native language – completely unprepared2) so we spent some time changing things around and then went out, into the night, to explore Waikiki.

It was 9 in the evening and there was a lot of activity – people walking, music playing, tourists being tourists – so we felt very safe walking the streets. One guy asked if we wanted to take our picture together, another tried to make us smile, while another walked down the street with his ukelele, playing and singing to himself. We got the vibe that things were Laid-Back in Waikiki, and for some reason it made me feel confident; so confident that I managed convinced a store owner in the mall to stay open long enough to make us some fries3.

In Hawaii they have surfboards on their fire trucks

While he cooked the fries, we spoke about the economy, traveling and life in Hawaii. One interesting thing that he pointed out was that the Hawaii tourists see and the Hawaii residents see are completely different islands and that sometimes it’s easy to not see beyond the tourist-y Hawaii. I found myself enjoying a serious conversation with a random stranger, we chatted a bit more about the economy of Hawaii and what locals do for work, then, with fries in stomach, Eve and I carried on exploring.

The next morning, we boarded the city bus to go to the airport, everything went well (if by “went well” I mean that it’s OK for the bus driver to leave the bus on the side of the road for 15 minutes) and we found ourselves on a plane to Guam. The last time we checked, the flight from Guam to Manila was overbooked; another adventure awaits.

1 Some names are changed, because, I felt like it.
2 Shanella’s first law of travel
3 That was a lot of confidence for a shy and introverted girl.