Last fall I posted a post about my fall shows. Not everything made it to the Finale, and since I just saw the final season finale on hulu, I thought I’d do a recommendation post. Just because1. 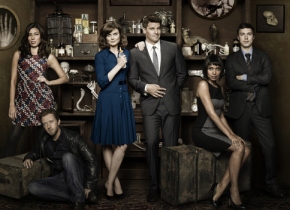 Bones has always impressed me. It has the perfect balance of drama and investigation. I love the way all the characters work together, they all have great on screen chemistry.

This season Brennan and Booth finally get together. *confetti* But, along with that lovely happening and the beautiful addition of Christine, there is a lot of smart cases and interesting solutions.

One thing I always love about Bones is the killer finales, and this season delivered. Bones is framed for a crime and they leave us in the middle to cross our fingers and hope that the crime is solved in the first episode – or at least the first two or three ones – of the next season. I for one, cannot wait! This one was good … a computer hacker genius, a clue left in spit! Pretty creative stuff.

Parks and Recreation has that dry humor with just enough adorableness that keeps you interested enough to go back for more. Every new episode I found myself wondering if I really wanted to watch and after watching, I always am glad I did. The cast work well together and you can’t help but find each character endearing. 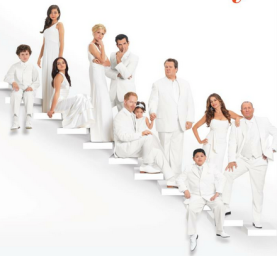 Shot in the same documentary style as The Office, Parks and Recreation follows a group of government employees, lead by Leslie Knope, the ultimate overachiever. This season Leslie is running for office and nothing can stop her from winning – or, trying to win.

This season finale wasn’t explosive, but there were quite a few heartwarming moments. I can’t wait to see what Leslie has up her sleeves for next season!

What can I say about Modern Family? It just keeps getting better and better. It’s hard not to love this crazy family.

The big shocker this season was Lilly’s sudden aging, however, that was easily overlooked after a few shows. There were a lot of great episodes this season – Claire’s stop sign wars has her running for councilwoman with hilarious outcome, Haley’s college woes, that “period” episode, visiting Disney (um, can I have those shoes, Gloria?) and Cam and Mitch’s adoption attempts.

One thing Modern Family can guarantee the viewer is a good laugh and this season was not a letdown. They did manage to leave us with that tiny shocker in the finale … oh the fun things that can happen with a new addition.

I had a hard time making it through Community this season, but, I made it! I think my favourite episode this season was Remedial Chaos Theory with the different timelines. I really liked what they did there.

Of course, Community won’t be community without it’s alternate universes and animated episodes, and they did not disappoint. The ending(s?) were great to watch, so much so that I’m going to keep Community on my list of TV shows for next fall. Safe! 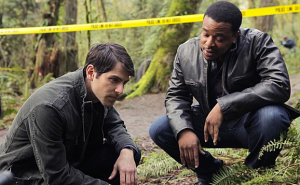 Nick and Hank at a Crime Scene4

In the season’s Raising Hope, Jimmy and Sabrina are finally together – eh, it doesn’t matter either way. To be quite honest, Burt, Virginia and Maw Maw are the stars of this show. Their comedic timing, and the funny situations they get into left me chuckling. I’m definitely going to keep this one on my list!

Finally, the fairytale shows! Grimm and Once Upon A Time are both staying on my fall list! What amazing shows! They took completely different takes on the fairytales and they both did an awesome job.

Grimm was investigative, so if you’re a fan of detective shows, Grimm would be a good fit. Nick Burkhardt, a homicide detective starts seeing strange things when his Aunt shows up and informs him that he’s descended from the Grimm brothers, and that the tales they chronicled are based on real incidences. The creatures in Grimm are dark and dangerous and the writers did a great job weaving the creatures into the crimes that Nick and his partner were investigating.

Once is a bit more on the dramatic side. The fairytale characters are under a curse from the Evil Queen. She banished them all to Storybrook – a place in the human world – to destroy Snow White’s happiness. It seems a little extreme, I know… and Emma’s (the heroine, Snow’s daughter) sudden belief in the fairy-tale world was a little unbelievable. The reason I liked watching it, however, was for the fairy tale timeline. I loved what the writers did with the characters, how they gave them pasts and interwove their stories. Chris Colfer’s new book The Wishing Spell, actually reminded me of Once – though, his version is more tamed.

Well, that’s about all the TV shows I had time for. I had to give up on Fringe, it was getting a bit stale and repetitive. Castle also fell into that stale, repetitive cycle, and the drama between the partners wasn’t spectacular. Why can’t they just be partners and that be the end of it?

I also stopped watching The Secret Circle and Pan Am, pretty early on into the show. They both lacked in grasping my attention, though, if Pan Am had more of that spy story line that they were developing, that might have been fun!

1 It’s my blog and I can do whatever I please.
2 Image via Fox.com
3 Image via Modern Family’s Facebook
4 Image via NBC.com

5 thoughts on “Fall Lineup: Who Made The Finale?”