Fangirl; n.: a female who supports an idea, trend, company etc, with an intensity bordering crazy.

Here’s the deal, I’m not crazy (sorta, kinda). I just love books, and because I love books, I love the people who write those books. With the entry of Twitter to the world of Social Media, it’s become easy to have a conversation with authors who were otherwise unreachable – except when they tour. So when one of my favourite authors respond to my tweets well, I usually have a moment of excitement, then I carry on with whatever I’m doing. 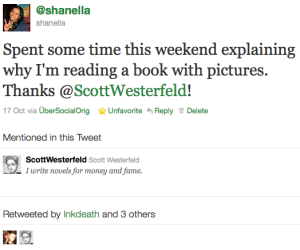 So when Scott Westerfeld retweeted my Behemoth tweets? *yay* 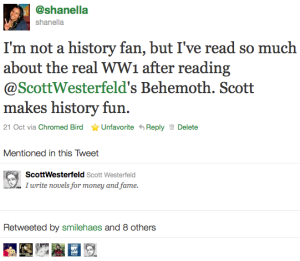 BTW, the last book in that trilogy comes out this Fall! I hope Mr. Westerfeld goes on tour with his wife!

Then Justine Larbalestier responded to me when I made a comment about her name. I like Justine for a lot of reasons, she’s the reason I got into YA lit as  much as I currently am. I was looking for a Harry Potter fix between books and one of my friends mentioned a controversial book geared towards young people and of course, I had to check it out. After reading Magic or Madness, I decided to read the rest.  It’s also where I picked up the word widdershins. That’s a cool word.

Once I was finished with the Magic or Madness trilogy I found her blog and realised that she was the wife of Scott Westerfeld, whose Uglies books I remembered seeing on the shelves in the bookstores, but always passing them by because the name sounded superficial (yes, I was judging the book by its name). However, realising that Justine was made of awesome, I decided that her husband was probably made of awesome as well and bought the first Uglies book. I’ve been devouring his stuff ever since. Scott is most definitely made of awesome.

Then I started reading Scott’s blogs, and reading the blogs of the authors Justine and Scott recommended and the rest is history.

I’m not sure who did it, but somewhere along the line Libba Bray’s A Great and Terrible Beauty was recommended. I bought it. I read it. I loved it! Then I became a Libba Bray fan. I don’t know what goes on in the mind of Libba Bray, but I can hypothesis and it’s scary but wonderful. After reading her Going Bovine novel, I wondered if that wasn’t more an autobiography than a work of fiction. She’s insane. She’s funny. She’s ingenius. 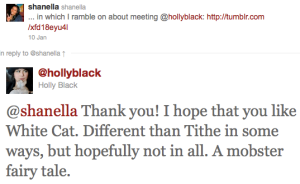 Enter Holly Black. I saw her books in the bookstore a number of times, then one day started thumbing through Tithe. I got as far as the title page, I’ve been reading Holly’s books ever since. She’s a master of world crafting, faery lore and now, mobster fantasy. Wow. Impressed. *hat off* *confetti*

This can go on, but I’ll conclude now with …

2nd moment: I cannot tell you how happy I was that Maureen saw my Ginny European Tour map and loved it! I spent a lot of time on that map and I seriously want to visit all the places she described in her book 13 Little Blue Envelopes. So, to see your work appreciated by an author who worked hard to present a good book? Priceless.

1st moment: Not only did Holly Black say that she loved my steampunkesque necklace during the ZvU debate signing, but Justine Larbalestier, yes, THE Justine, recognised my twitter handle (first name) and even remembered my profile picture. I might have been smiling like a loon, I don’t know, but it was the best. fangirl. moment. ever.