It’s the second day and I’ve already broken the rules! But this story, while not about something I love, should still entertain.

Yesterday was the first of the month, I had to get a monthly pass for the LIRR and the train that I finally caught cancelled at Jamaica. Again. For the second time in three weeks. A wonderful start to the month. Hello Monday!

On my way back home, I boarded the D train just in time to hear the conductor, over the loud speaker, letting everyone know that there was a stalled train at 34th and we’re being held at the station.

Thinking, oh well, perhaps the issue has been resolved and the F will run, I stayed on the F train and watched as another D train pulled into the station – and then pull out of the station. The doors to the F train remained opened.

Another train, a B I believe, pulled into the station. Since two trains left the station on that track and the F train was still standing, doors opened, I left the F train and went into the B train, and one of the following happened:

If you guessed two, then you are correct.

I travel to work on the Long Island Rail Road and I tend to notice interesting bits of behaviour. One behaviour in particular is the inability of passengers to say, “Excuse me” when they want to exit a row.

The typical train has 5 seats in a row – three on one side of the aisle and two on the other  – there isn’t enough space to pass the person sitting in the aisle seat without first asking them to move.

So, how do they indicate that they need to exit? Well, it’s really simple … they start to fidget. They gather their things and angle their bodies and there is this expected agreement that this fidgeting means they want to exit. This reminded me so much of a post on “She’s not from Yorkshire1” that, one day, when I was in a particularly mischievous mood, I decided to see what would happen if I ignored the “I need to leave” cues.

We were waiting to pull into the station at Jamaica – a big transfer station – when the lady next to me started to gather her things and angle her body. I wasn’t listening to music, only reading a book, and I decided to be conveniently engrossed in the paragraph that I was reading. This wasn’t difficult, the book was a good one2, and I was at a good part. It took her a moment to realise that I was missing her cues, but she finally said, “Excuse me!” and so I said, “Sure!” and got up.

Thankfully she was nice about it3. I just find it interesting, wouldn’t it be easier – and quicker – to say, “Excuse me!” than to fidget and wait for the person next to you to notice?

1 They do that in NYC as well!
2 I was reading The Fault in Our Stars by John Green
3 I was lucky to get a decent person, not all people are decent and not all people will react politely. Basically, this is a disclaimer saying, “Reactions may vary, so observe with wisdom”.

In the belly of the beast I sit,
It’s quiet purr resonating;
Waiting.

On tracks of steel it glides,
Seats reverberating with the low hum
Of it’s metal heart;
Moving.

A rapid, rhythmic beat resounds
As it rushes to it’s destination.
Metal on metal, it slides to a screeching halt;
Arriving.

No really sure what exactly this is called, as I don’t recall seeing a plaque, so I’ll call is the Commuter Sculpture. 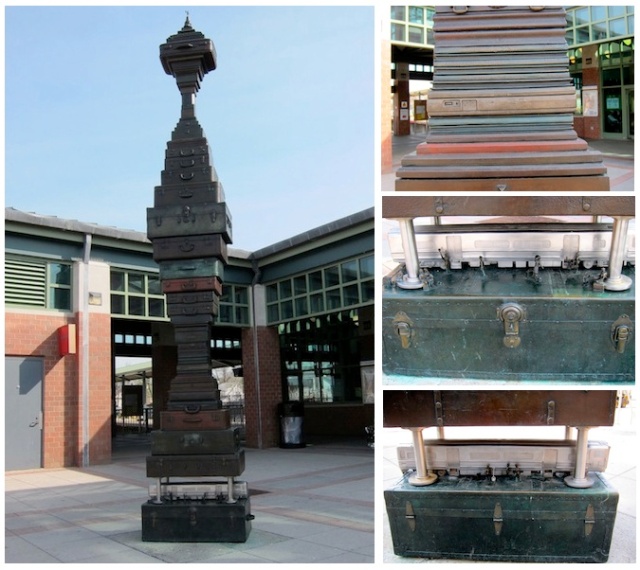 I saw it while at the Hempstead Long Island Railroad Station and I really enjoyed the detail of the train at the bottom. (Did you notice the laptop in the stack?) 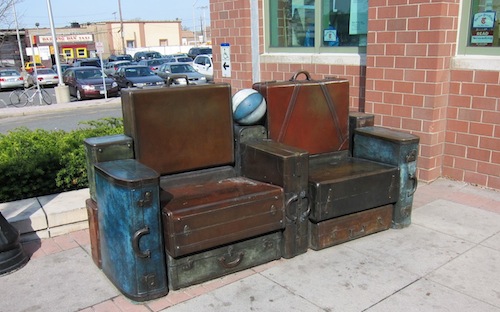 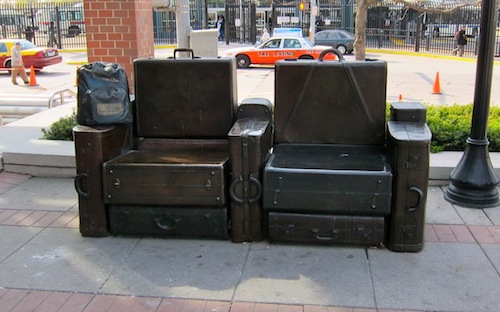 They also had these artwork benches … I suppose it brings new meaning to the phrase, “sit on the luggage”. Does anyone say that?

Anyway, there is a book-bag just sitting on the bench, should I say something?

The train sped away as I stood there taking this picture and wondering what to do next. Should I go to the library? Stroll along the little park near the train station to see whether the brook is babbling or sleeping? Just go home?

Finally a stroll around the surrounding areas won, so with my bag left in the car I took my phone started walking to the downtown area. There isn’t much of a downtown, it’s just a street really, but it smelt of lovely cakes and pastries.

I walked away from the business section of town and into what seemed like church alleyway. First stop was the Unit Church of Christianity. This little building isn’t the church, that’s the building next to it. I suppose it’s an office of some sort, but whatever it was it was cute and reminded me of a cottage.

Just across the street, on the corner was this building. I don’t think it was a church, it seemed an extension of the Christian Academy a few blocks away. I liked the peeling wooden steeple on the brick building.

Just around the corner you have the Roman Catholic church (there are at least two others less than a mile from this one). At this point it was getting cold so I made my way back to the car.

I happened upon this gem in the window of a store. For some reason there seem to be a lot of things wrong with this picture. Definitely not something I’ll be placing on my front lawn, though, truth be told, you won’t find anything on my front lawn, I don’t believe in decorating for Christmas. Call it lazy, I call it smart. =)

I happened to board the 5:32 train again yesterday. This time I went into the second car from the front, I didn’t want to deal with the mean 5:32 train gang. However, I happened upon another gang, this one a quieter, friendlier and all around nicer gang than the one in the first car. I’ll call them The 5:32 Train Players.

You see, this gang of friends/colleagues/train riders had two men in their group who sat facing each other, sharing a folder across their laps, with some newspapers to make it sturdier, and were playing Rummy.

I sat there for a minute looking at them play, there was even a point where I was tempted to ask them to deal me in! Who thinks about these things!? I was impressed.

Perhaps I’ll observe this gang of travelers today as well; we’ll see if they play again.

I don’t usually take the 5:32 train home, however, on occasion I do, and I have observed a thing or two. Well, mostly one thing. There is a gang of about 7 people – men and women – who take that train home together. Also, if I was being honest in my observation, they are jerks.

I noticed the 5:32 train gang the second time I rode that train. I was one of the first persons into the car and sat in the section with the seats facing each other. Unbeknownst to me, I was sitting the the gang’s “territory”. With book in hand, I started reading, but couldn’t help but feel a little strange when the man sitting opposite me started giving me weird looks. Was there something on my face? Is a button open? Why does he keep glancing at me and smirking? Then, I figured it out, his friend walks in and apparently I was sitting in his friend’s seat, so his friend had to sit in the seat behind him. They then proceeded to have a loud conversation with each other and the other five people in their gang.

Unfortunately for the gang, the train is a public ride and I got there first, so they couldn’t tell me to move. However, a woman with her suitcase came in, and there was a seat available in our section, but the men refused to move over to let her sit. Then they all proceeded to mock her and the size of her suitcase when she went to find another seat. Appalling.

The gang seems to be equal opportunity though, not only are they jerks to other passengers, they are jerks to each other. For example, yesterday I sat in their section – though not their seats – and I noticed one of their members try to sit with them, but apparently one of the men was saving those seats for two other men, so he told her no (even though four people could fit in that section). So, she came to sit next to me, then proceeded to have a conversation with the woman in front of her. Afterwards, she proceeded to pull out her mobile and have an animated conversation.