I’ve been to D.C. once before, and it was quite a whirlwind adventure, but this time I had a plan. And a map. 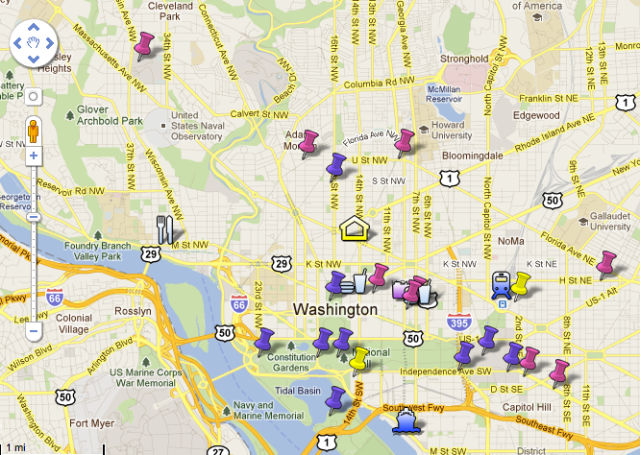 Before the trip, a few of us listed the things that looked interesting, our choices were placed on the map, with colour-coded pushpins and icons where agreed upon activities and restaurants could be found. Yeah, I’m a bit over-organized at times.

After checking in to the hotel, we had lunch at The Founding Farmers, a really great restaurant with really great food. Then we walked to the pier, a 2.5 mile trek from the hotel, taking in the sights.

We took a boat tour down the harbour, passing under bridges, seeing tiny light houses and boats that looked like houses.

Dinner that evening was at District Chophouse and Brewery, where I ate more meat, but good meat. We passed through their Chinatown on our way back to the hotel.

The next day a few of us visited the Spy Museum, which filled with so much information, I think you need more than one day to take it all in.

After the museum, we ate at Good Stuff Eatery, where the water contains water and the burgers were good. I don’t watch Top Chef, but, the restaurant was owned by one of the Top Chefs, and I was definitely impressed with the burger – and the line to get the burger.

Afterwards, we took a peek in the Library of Congress – an impressive building – and walked down to Ebenezers Coffeehouse where we attended a National Community Church service in the basement.

After service we headed down to Georgetown Cupcakes – featured in D. C. Cupcakes – and stood in a very impressive line for some extremely impressive cupcakes.

On our final day we had brunch at The Madhatter, which had the best business card I’ve seen! Where can I get one of these? Brunch was yummy!

We took the Amtrak back to New York City, the end of a capital weekend.

{view more pic from the trip}

4 thoughts on “A Trip to The District”