My feelings about Bin Laden … these guys said it best … 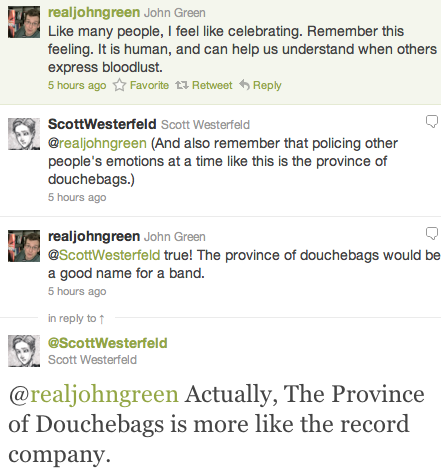 Lost of human life is never something to celebrate. When is it revenge and when is it justice? Aren’t all allowed Grace?

That being said, he did evil. I’d go as far as to say he was evil. The judging side of me says that he got what he deserved. The lives of many men, women and children – innocents – were murdered because of him and his plans. So, with all my allowance for humanity there is also relief, that after 10 years, justice is served. Otherwise, I have no personal feelings on the matter.

In other news, I am quite fascinated with the online coverage and the story of the man who tweeted the raid without even realizing it was the raid. Yes, it was Twitter that first broke it for me.

And, in other, other news …. isn’t it an interesting time to be living on the earth? In one weekend we have a royal wedding and the modernization of the royal family – a legacy that has been alive for years – as well as the capture and death of America’s most wanted – after 10 years of searching. Both of which were broadcasted, within SECONDS, online.