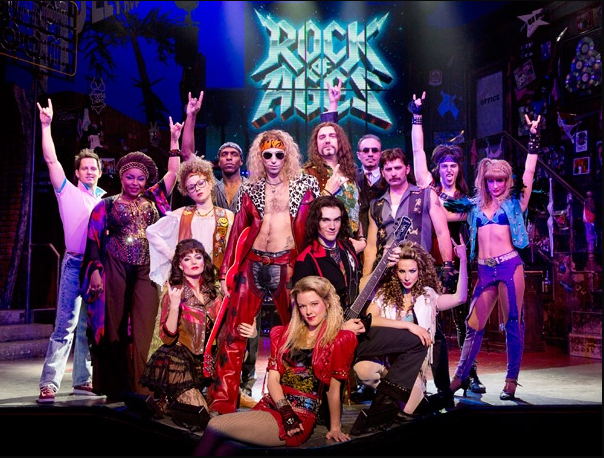 Rock of Ages was one part unpredictable and all parts spectacular. You don’t have to be a fan of the eighties to love it, but it wouldn’t hurt.

The story follows two young, fame-seeking kids trying to live out their dream on the strip. Drew the singer and Sherrie the actress meet at The Bourbon Room, a place where they both work while trying to realize their dream. There is the usual falling in love and miscommunication that leads to the ultimate breaking apart, followed closely by the realization that they were both wrong. However, the way Rock of Ages presented it is so fresh and fun that it’s easy to overlook this formulaic love story and enjoy the show.

Lonny – the narrator and part owner of The Bourbon Room – is quite hilarious. Regina, a protestor who is trying to save the strip from being torn down by a pair of German developers, also helps to bring a comedic element to the show. Her and Hans were probably my second favourites after Lonny.

The music was great! I loved the way they sung the 80s rock songs, it was edgy, but also a bit classical. The music wasn’t overwhelming, nor did it feel forced. Everyone in the cast did a great job on the vocals and I was blown away by Drew’s voice. I absolutely loved that the band was on the stage and at some points participating in the act itself.

The set was pretty simple, nothing splashy; but I loved the touch they added with the 80s Las Vegas strip memorabilia that hung on the walls.

The ending was the best, make sure you get an orchestra seat because you don’t want to miss the glittering confetti!

Rock of Ages is definitely Broadway’s biggest rock party. Check it out while you still can!