This version of FIVE THINGS is brought to you by Relient K’s Wake Up Call, because it’s 2am.

I love Easter for a number of reasons, first there is the fact that it’s the day Christians remember, not only the sacrifice and suffering of Christ, but also the fact that he rose from the grave, victorious, conquering death. Secondly, I love that I get to spend it with friends and family. The planner in me also loves seeing plans come together and people having a good time. I’m very happy to be a part of my community of friends, they really are a group of fun and interesting people!

I don’t usually get to hang out with many of my cousins as much as I would like to, but the times we do hang out are always lovely. I am glad I got the chance to enjoy dinner and  a movie with D&A – even if the movie was Temptation, and even though Kim was the best actress in that entire flick. I love the openness, candid talks and crazy laughter that we experience together. I love getting to know them and see them grow into who they are and I enjoy our differences and similarities. Family is awesome.

“Turn up the car radio we can be karaoke superstars!” You know that moment when you chose a song from Wicked to sing at karaoke, and someone else in the room knows the song so you don’t have to sing both parts by yourself. And then you decide to do What is this Feeling? because you’ve always wanted to do it at karaoke but couldn’t because no one else knew the song? Yeah, that feeling is awesome.

I love karaoke! I especially love it when you have the right crowd to belt out show tunes and old tunes, it makes for an epic night. 🙂

Brunch at Sarabeth’s is, quite frankly, amazing! Breakfast is probably my favourite food to consume, and Sarabeth’s (even though the wait was crazy!) serves some really good breakfast! I spent a Saturday there with my college friends, celebrating an upcoming birth – it was a lovely time! Great company, great conversation and fun all around. I like being able to hang out with my college friends and share in the milestones of their lives. I hope this lasts for a very long time. =)

Since I’m the only one “out east”, I often go “west” to see my friends, but when they make it out this way I can’t help but feel loved! Thanks to my friend who drove out to have dinner and coffee with me as we chatted about serious and not so serious things. I really appreciated the time and really enjoyed the conversation. And let’s not forget good coffee at quaint  coffee-shops. Who knew my neighbourhood hid such an awesome gem …

My dad sometimes tells a story of a time when I was younger. We were at my uncle’s auto shop and there was a gate standing in the yard. It wasn’t attached to anything, it was heavy, made of metal and able to stand on its own. My dad was on one side while I was on the other side playing.

Dad saw the gate start to tilt towards me and the only thing he could do was yell at me to run! He said that I followed his command to run just in time since moments later the gate fell. I came out unscathed because I heard my father’s command and executed it, because I trusted him without doubt.

When I was a little older, I was waiting on a bus to take me home from school. As I stood at the corner I felt the need to move away from where I was standing (near the edge of the sidewalk) to a place closer to the buildings. Just as I moved my position, a truck carrying glass bottles came around the corner and one of the cases with the glass bottles fell off, breaking and flying all over the area that I vacated just seconds ago.

Sometimes I wonder about myself now. Would I have reacted the same way? When I ask God, “Why?” am I asking because I want to know, or because I can’t trust? I wonder if my want to know everything is due to the fact that I don’t fully believe Romans 8:28?

We are in the fourth month of the year 2013. Spring has officially begun, but Mother Nature didn’t get the memo. I’m thinking we need to rename the seasons, there is Fall from November to January and then Winter from February to April. May is Spring, June/July is summer and everything else is a sort of muggy uncertainty.

Enough with the weather, that universal topic of conversation; it’s time to talk about FIVE THINGS!

I love Broadway, so I try to go to a show at least once a year (or more). 2013 started off with Rock of Ages, and it was wonderful! I would recommend this show to anyone – it’s electric!

I love getting together in small, intimate groups with friends, especially friends that I consider dear to my heart. This past month I got to hang out with some of my old workmates who are dear friends of mine. We met at someone’s house and spent the day around the table, having brunch then supper and talking about life, work and babies! I think I’m going to pass on the babies! haha

Since it was a brunch get together, we each made dishes and I decided to try a recipe that I found on Pinterest. I’ve done a few successful ones and some not so successful ones, my fave being the Personal Lasagna Rolls, but ever since I started my “Delightful Dishes” board, I’ve always wanted to try the French Toast Bake. So, after some consideration, I made it for brunch and, I have to say, it was DELICIOUS! Instead of brown sugar, I only had white sugar in the house, so I added some molasses (yeah, we have that and not brown sugar) and it gave the base a sort of pancake syrupy taste. Of course one serving was about 500 calories, but, hey, it’s the weekend, I can let my hair down (and loosen the belt).

Other such intimate hangouts included time spent with three other ladies, one who I haven’t seen in a loooong time due to time and distance. That was an awesome evening, I started out hanging with C and we talked about a ton of things and I shared some funny (and disturbing) stories about men, that I was experiencing at the time. Watch this space for a detailed post in a month or so. (hehehe)

Then spending the night at the movies with my soon-to-be-published cousin A.J., watching Jack the Giant Slayer and making fun of the predictable plot. I don’t usually talk during movies in cinemas, but when there aren’t many people there it really is a lot of fun laughing and talking about what’s going to happen next. So predictable.

Then this past Sunday there was a spontaneous Sunday lunch (well I had two lunches, like a hobbit) because I was missing some faces, but only lunch #1 was considered intimate. Large gathering does have it’s time and place as well.

Girl Scout Cookies!!!!! The Girl Scouts know about demand and supply. I can’t tell you the number of cookies I’ve consumed in the past two weeks … I’m ashamed to count them! But those Thin Mints and Tagalongs are just SO GOOD!

Just the other day I was on my way to the threading salon where I passed a group of Girl Scouts strategically located right outside of the salon, I was going to purchase 1 box of Thin Mints, but ended up purchasing 2 boxes of Thin Mints and 1 box of Tagalongs. I’m a little tempted to buy a bunch and hoard them, but I’m afraid that might lead to the over-consumption of cookies over the span of a few hours.

This might have been my first bookish event this year – I’m slacking, I know! I saw Andrew Jenks, Alaya Dawn Johnson and Eireann Corrigan. I wrote a bit about the event on my book blog, so you can check it out there if you’re interested (and see photos from the event).

Finally, The Good and Beautiful God book club met for the second time a few weeks ago. I love reading and discussing books with others, it really does amaze me how two people, reading the same text, can find different insights. I love the sharing of inspiration and ideas that come out from the text. I also love how everyone reads differently and react differently to the text. Discussing books shows me how diverse our world is, I absolutely love it! 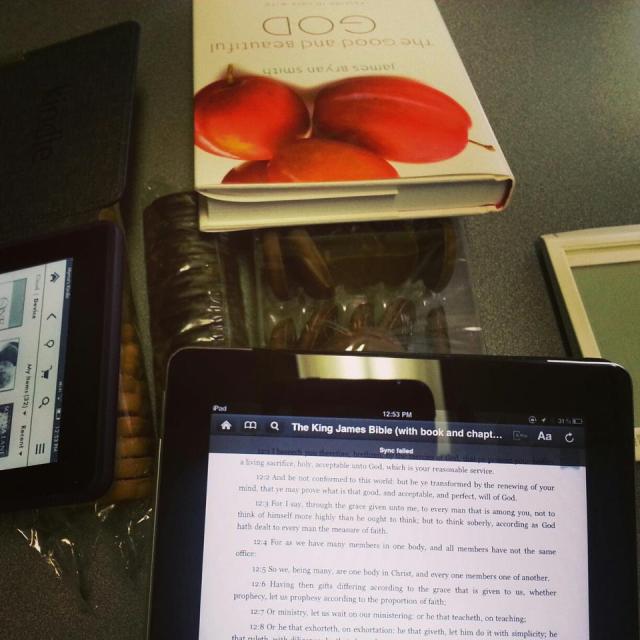