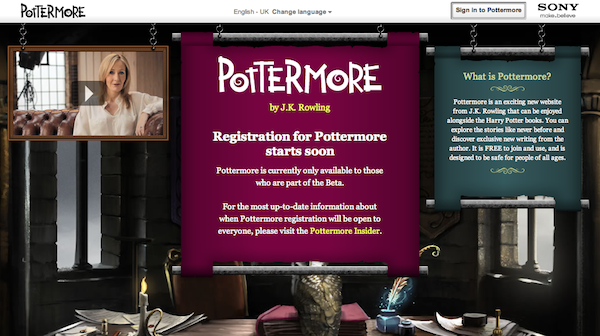 In late September, I received my email inviting me to sign into Pottermore. After a bit of excitement, confetti and general happy making, I sign in, for the first time, to the newest Harry Potter experience.

Pottermore choses a username for you, so I’m AsphodelPurple124 (find me; friend me) and then it takes you on an adventure through the first book in the series. Each chapter contains several sections with hidden messages, items and exclusive content from J. K. Rowling.

I love the graphics and what they did with the site. However, I’m hoping when they come out of beta there will be, well, more! I love the chapter explorations, but it would be nice if they implemented little mini-games, or more background on the characters. I was under the impression that JKR had a ton of background information on characters that never made it into the books. Short stories and such will add a lot more to the experience. 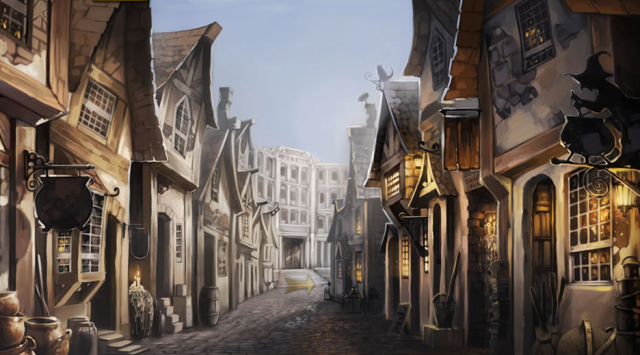 You get to walk through Diagon Alley where you can get money from Gringotts and shop in some of the shops. It’s a lot of fun, until you realize that you can only buy from three or so store. Even if you couldn’t buy, it would be nice to walk through other stores.

In Diagon Alley you can go to Ollivanders to get your wand. But remember, it’s the wand that choses the wizard, so you can’t choose your own wand, but you will get to answer a few questions. 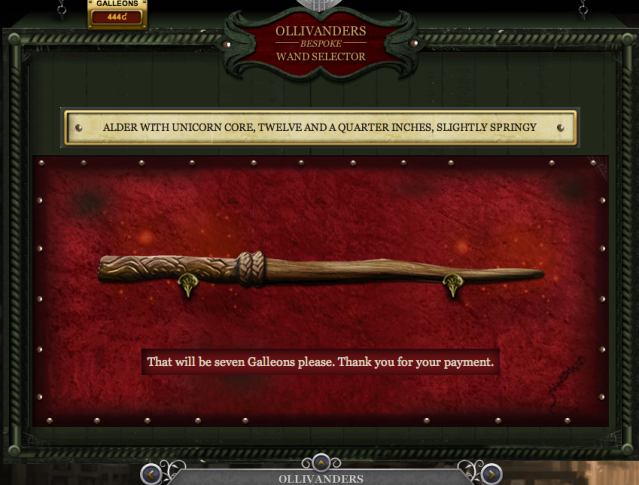 J. K. Rowling offered some descriptions of the wands; you can break down the different attributes to different personality traits that are fun to read. For example, my wand breaks down to:

Alder is an unyielding wood, yet I have discovered that its ideal owner is not stubborn or obstinate, but often helpful, considerate and most likeable. Whereas most wand woods seek similarity in the characters of those they will best serve, alder is unusual in that it seems to desire a nature that is, if not precisely opposite to its own, then certainly of a markedly different type. When an alder wand is happily placed, it becomes a magnificent, loyal helpmate. Of all wand types, alder is best suited to non-verbal spell work, whence comes its reputation for being suitable only for the most advanced witches and wizards.

Unicorn hair generally produces the most consistent magic, and is least subject to fluctuations and blockages. Wands with unicorn cores are generally the most difficult to turn to the Dark Arts. They are the most faithful of all wands, and usually remain strongly attached to their first owner, irrespective of whether he or she was an accomplished witch or wizard.

Minor disadvantages of unicorn hair are that they do not make the most powerful wands (although the wand wood may compensate) and that they are prone to melancholy if seriously mishandled, meaning that the hair may ‘die’ and need replacing.

After purchasing your school things and boarding the Hogwarts Express, in chapter seven you get sorted with the rest of the first years. I got sorted into Ravenclaw! 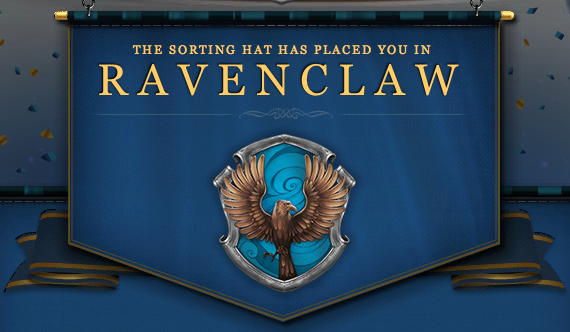 While I’ve always claimed that I’m a Gryffindor, I knew that I had more Ravenclaw-ish traits than Griffindor, so, I don’t mind. The sorting is a bit of a personality test, giving you a number of multiple choice questions and placing you into the house depending on your answer – or that’s what I think. It could also be randomly selecting since all the houses seemed to have an even number of members.

After being sorted, you gain house points as you collect items from each of the chapters. Currently, only the first book is available, but I’m curious to see what the other books will look like.

There are other things that you can do around the site, brew potions, cast spells (though, this seems a bit spotty at the moment) and duel – which, was not working when I last played. I’d like to see how they will publish the ebooks; since Sony is hosting the site, I’m hoping they don’t do sell it in Sony-only format. That would be upsetting.

I’m looking forward to seeing the site outside of it’s Beta form.

[all images are screenshots of Pottermore]

2 thoughts on “Pottermore: Thoughts and Recommendations”