The Whitney Museum of American Art partnered with Foursquare back in February. Their partnership offered a badge to users – after checking in to certain places – so that the cost of admission for anyone with the badge would be $5 (as opposed to the usual $18). I visited the museum this past weekend, using the discounted price, and took a stroll through the exhibits.

A few of the exhibitions stood out to me. The Glenn Ligon exhibit was pretty heavy. It is available until June 5th and has a number of prints, photos, drawing and even some neon lights. It’s not light hearted and whimsical, it practically reaches out and punches you in the gut. I’ve never thought about my minority status in society as much as I did while walking through this exhibit.

I’ve been lucky to be unaffected by racism or prejudice when it comes to my colour and womanhood — or, if I have been subjected to any prejudice I haven’t noticed. However, while walking through this exhibit one thing struck me, that thing is, at a young age I never knew colour. I never looked at my brown hands and thought, oh, I’m brown and that person is white or black. I just saw people. Even now all I see are faces and humans and I’m glad for that bit of colourblindness.  However, it was only when another person voiced it that I realised that we were all different. I appreciate the differences and can understand the need to cling to your own “group” so to say, but I still don’t quite grasp it as I never feel comfortable with only one race or one social class.

One of the things that stood out to me about this exhibit wasn’t just colour, but also the need to be a part of a group, or to have an identity. It’s a longing inside everyone to be a part of something greater. That’s what grasped me most of all. 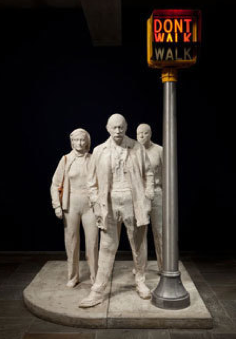 One of my favourite pieces was on the fifth floor. It was the Walk, Don’t Walk sculpture by George Segal, made to represent pedestrians in New York who move along in a zombie-like state as they carry on with their day.

I can understand this piece. Sometimes I feel the same way. When I walk down the streets it’s usually to get from one place to the next. Many times I have my ipod in my ears and I hardly pay attention to the people around me. No smiles, no chatting with strangers, just pure focus on getting to my destination. It amazes me that I could stand so close to someone on the sidewalk, waiting for the light to change and not even realise that they are there. How robotic it seems. Then there are times when I make an attempt to be aware and to see what’s going on around me. During these times I get a glimpse of beauty of the city I live and work in, or snatches of conversations that reveal a lot about the people around me. For example, there was a time when a woman on her phone was arguing with her significant other. I felt sorry for her, I wanted to give her a tissue so that she could wipe the tears that she was holding back. Couldn’t the other person wait until she was home to have this conversation? I thought. I didn’t act on my impulse, because if I did I would be breaking that unspoken rule, you do not listen to other people’s conversations, even if it’s happening right next to you. You just pretend that you don’t hear and you carry on your life.

The Breaking Ground: The Whitney’s Founding Collection was perhaps my favourite exhibition. According to their website:

At the turn of the twentieth century, Gertrude Vanderbilt Whitney, an heiress and sculptor born to one of America’s wealthiest families, began to assemble a rich and highly diverse collection of modern American art. This group of objects, combined with a trove of new works purchased around the time of the Whitney Museum’s opening in 1931, came together to form the founding collection.

The portrait of Mrs. Harry Payne Whitney was my favourite in this exhibit, I’m not sure why, it just caught my eye and reminded me of another time and another society. Then of course my imagination took over. What happened in that time? What happened right before, or after, or even during this painting? What was the world like?

I’m really glad that Gertrude Vanderbilt Whitney decided to follow her dream as a sculptor and open a museum for American Art. I think it’s important to see our culture captured through art of all forms. The expression of an artist – what they are going through, how they view the world – is very important for others to experience. I think that once we can see the world through another’s eyes, it becomes difficult to ignore others and to stay in our little bubble. I was glad to have experienced a bit of the past, a bit of another person’s point of view and also to understand a bit more of myself through the art I saw.

The partnership and lower admission cost goes on until May 31st, I would highly recommend foursquare-ers to take advantage of it! Also, all images here were from the Whitney Museum website. I couldn’t take photos while inside, which is sad, but understandable. I’m just glad the website had the images that I wanted to keep in memory.