Rising before the sun, my friend and I headed into the New York City to stand in line at the Al Hirschfeld Theatre’s box office to get rush tickets. We were aiming for 8 a.m. but got there around 7:45 to find a 15 people queue – I asked the first in line, they were there since 6 a.m.).  I stayed until 9:30 and then left for work; 30 minutes later I got a text saying we got the tickets! yay! =)

If you want to try rush tickets, check the website for details. The show was definitely worth getting up before the sun!

The set was very simple, just a few coloured rises that moved on and off stage when necessary, the backdrops, office furniture and box designed to look like a lift. Very simple, but very well done. 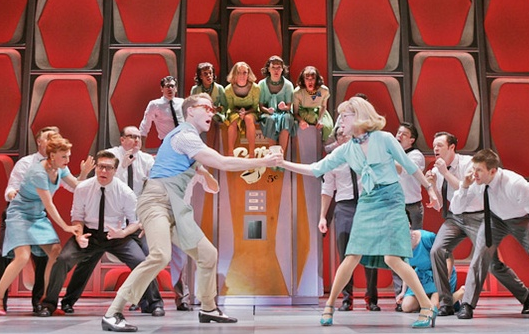 The costumes were mostly business suits and dresses. I absolutely LOVED the colours, I would wear some of those styles to work! For some reason the costumes reminded me of Annie (the movie, I haven’t seen the Broadway show).

The story  follows a young and ambitious J. Pierrepont Finch (Daniel Radcliffe), a window washer at the beginning of the story, and his climb up the corporate ladder.

As J. Pierrepont Finch climbs the corporate ladder, a secretary Rosemary Pilkington, played by Rose Hemingway, has set her eyes on making him her husband. Meanwhile Biggley’s nephew, Bud Frump, played by Christopher J. Hanke, is trying to blackmail his uncle into giving him a higher position.

Daniel Radcliffe did a great job! It took me until Act 2 to remember that he English and was using an American accent, he blended in so well! Also, I was pleasantly surprised by his singing and dancing skills. I can see Daniel going a very long way with his acting career. John Larroquette who played J.B. Biggley, the head of World Wide Wickets, was one of my favourites in the show. His character was quite hilarious and probably the one that provided the most laughs for me. I also loved Christopher Hanke, he did a great job in portraying Bud Frump and adding more laughs to the show.

I listened to the songs before the show (on Spotify) and didn’t think I would get the soundtrack , but, after seeing the show, I think I’m going to getting it! Some of my favourite songs were Coffee Break (hilarious and great choreography), Paris Original (such a funny song!) and Brotherhood of Man – I think Daniel’s dancing skills shone through on this one, see video below from the Tony Awards.

Great show, wonderful production. I had a fabulous time!